When I initially started out working with the Canvas API I noticed that the results of my rendering code were somewhat blurry and even worse, inconsistent. Some lines were blurry, others sharp. Coming from Swing it took me some time to realize that this was caused by the coordinate system of JavaFX, which allows for double precision rendering.
To solve this problem all that is needed is to use coordinates “in the middle”. So in my code you now find a lot of methods called snapXYZ() (similar methods can be found in the JavaFX code itself), which first casts the given coordinate to an integer and then adds .5 to it. The following screenshot shows the difference when using this approach. 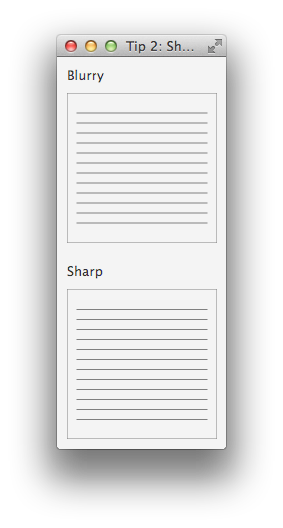 The code below was used for this example: